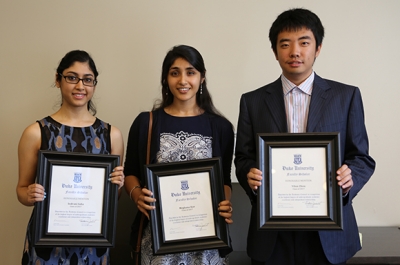 Many Duke undergraduates have found excitement in an original research project. Junior Meghana Rao has taken her research one step further and connected it in a socially meaningful way to problems right here in Durham.

Rao is conducting research on the gut microbiome of long-tailed macaques, attempting to see how changes in diet and social status affect the trillion of microbes inside the primates. Evolutionary Anthropology Assistant Professor Jenny Tung is mentoring Rao in the research.

But for Rao, it’s a short step from her work in Tung’s lab to her volunteer efforts with the Community Empowerment Fund, which helps homeless families transition into a more stable life built on employment, education and consistent shelter.

In addition to Rao, who received the top prize, Yilun Zhou and Indrani Saha received honorable mentions. All three share an interest in research that have strong real-world applications.

Rao’s research starts in a lab at Wake Forest University where, with Tung and Wake Professor Carol Shively, she’s studying how shifts in the microbiome of the macaques might explain the known correlation between stress and poor health. That study is also driving her work in Durham, where she’s trying to alleviate the consequences of stress and poor health that comes with poverty.

Understanding the connection between her two efforts is important to Rao.

“One of my long-term goals is to extend this research from non-human primates to humans and find solutions that can be used in medical practice,” said Rao, who’s planning a career in medicine. “I believe that understanding the interplay between sociality, stress, poverty and health is key to effectively treating patients and to alleviate health disparities due to socioeconomic stress.”

Carlos Rojas, professor of Asian and Middle Eastern Studies and chair of the Faculty Scholars Committee, congratulated the three recipients this past Thursday in the Breedlove Room in Rubenstein Library.

“This is my favorite committee,” Rojas said. “All of the candidates are of a stellar quality. We have a hard job narrowing it down to the finalists. Then we get a 15-minute interview with the finalist, and we pack a lot of intellectual energy in those 15 minutes.”

Rojas noted the diversity of majors among the award winners, saying “they are a nice cross-section of the entire university.  The students have eclectic, multi-folded interests.”

Rao “symbolizes what we are looking for in a Faculty Scholar,” he added.  “She devised a fascinating research project, intelligently designed and socially and even morally meaningful.”

Saha, a Program II major studying cognitive aesthetics, is looking to expand art aesthetics beyond vision by studying art in immersive spaces. “In immersive spaces the whole body in involved in the interaction,” Saha said. “When analyzing these works of art, we cannot continue to ignore the body.”

Her studies represent an area of overlap of neuroscience, psychology, philosophy, art history and visual studies. The current project takes a single, remarkable piece of art, Carlos Cruz-Diez’s “Chromosaturation” (see below), and uses each of these disciplines to analyze how the viewer interacts with the immersive piece of art.

“Indrani has a nimble and subtle mind,” said her mentor, assistant professor of art, art history & visual studies Mark Olson. “She’s also willing to take the great risk to push what she knows into new spaces.”

Her research into art and neuroscience began with a Bass Connections project on “Art, Vision and the Brain.” The artwork used by the Bass Connections team went on display last year in a "Seeing Color" exhibit at the Nasher Museum of Art.

Zhou’s research project was designed to teach a robot to make and pour a good cup of coffee, for which a grateful nation will applaud him. However, what truly stands out about his project is instead of attempting to program the computer, Zhou wanted to have it learn by observing humans perform the task.

Zhou said learning from human demonstration is a promising area of research that may train future robots to better navigate scenarios of multiple objects and complex interactions. While robots are capable of incredibly complex processes, they struggle at many “natural” skills such as making their way around a kitchen.

“The idea he was working on was tremendously original,” said his mentor, computer science professor George Konidaris.  If everything goes rights, Zhou will present the research in a paper at a prestigious computer science conference this summer in Michigan. The paper has been conditionally accepted for presentation.

“In computer science you publish by presenting at these kinds of peer-reviewed conferences.,” Konidaris added. “This conference is particularly competitive. Most faculty will have two or three when they are interviewing here, and a grad student will likely have one in their time doing the Ph.D. Yilun, however, very likely will have one just as a junior.”

Zhou’s study “goes beyond the engineering,” said pharmacology and cancer biology professor Cynthia Kuhn, a member of the Faculty Scholars selection committee.  “It asks the kinds of questions computer science ought to be querying.