Professor Richard Kay focuses on the evolution of primates and mammalian faunal evolution, especially in South America; the evolutionary origins of the Anthropoidea (monkeys and apes); and the use of primate anatomy to reconstruct the phylogenetic history and adaptations of living and extinct primates, especially Anthropoidea.

Bartholomew Sulivan was with Charles Darwin on the voyage of the 'Beagle'. Later in the 1840s, during coastal survey work, he collected the first Santacrucian fossils from the Río Gallegos region (or anywhere else in Argentina). He forwarded them to Darwin and Richard Owen described them. 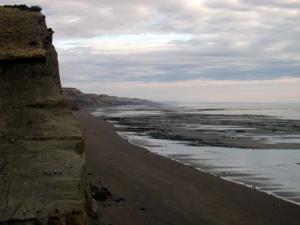 In the 1890s, Carlos Ameghino collected in this region and his fossils served as the basis for Florentino Ameghino's Santacruzéen (the Santacrucian SALMA). J.B. Hatcher (Princeton), B. Brown (AMNH), E. Riggs (Field Museum) and H.T. Martin (Kansas) made important early collections. The beds have been revisited by many collectors since that time.

Between 1984 and 2000, Adan Tauber surveyed the geology in this region and relocated the most productive fossil sites. In 2002, 2003, and 2004, the current research group (Vizcaíno, Tauber, Kay) visited and collected in collaboration with the museum in Río Gallegos.

Carlos Ameghino collected many fossil mammals including the first primates in the region. He returned them to the house of the Ameghino family in La Plata, Argentina, where his brother Florentino (below) described them. The Ameghino collections contained fossil primates – the first of pre-Pleistocene age know anywhere on the continent.

"Throughout eighteen years spent almost constantly in collecting fossil vertebrates, during which time I have visited most of the more important localities of the western hemisphere, I have never seen anything to approach this locality north of Corrigen Aike in the wealth of genera, species and individuals.”

Exposures of the Santa Cruz formation in the cliffs above the Atlantic are inaccessible. The best fossils come from the beaches between high and low tide levels.

The fossil-bearing beds exposed at sea level dip about 3 degrees on a southward strike so that at low tide (when tide is about 7 meters) the same bedding plane is exposed to a breadth of 500-700 meters to seaward. It is then possible to collect large numbers of fossils of similar geological age; most of the fossils from one locality are analytically indistinguishable from one another in age.

Removing fossils from the sites presents special problems because the material must be extracted when the tides are low and winched to the top of a steep cliff. Specimens are found projecting from sandstone and claystone layers in the inter-tidal zone and removing them is achieved using a gas-powered cement saw. 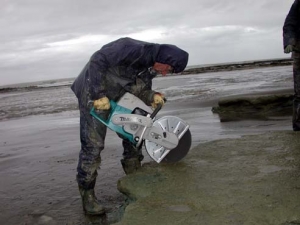 Once a block containing fossils is excavated, it is transported across the shelf beach to the base of the cliff using a wheeled cart. 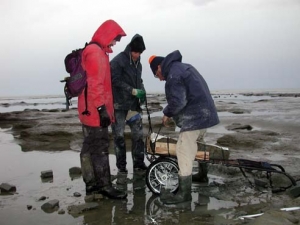 The blocks are moved to the base of the cliff. 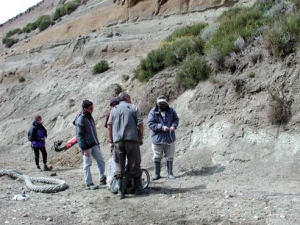