Is to determine which features of human social problem-solving and decision-making are unique amongst the hominoids – bonobos, chimpanzees, humans, gorillas and orangutans. (See "interactive ape family tree" in right column.) Identifying those psychological systems which are responsible for the unique features of human behavior is the first step to solving Darwin's greatest difficulty.

Knowing our evolutionary relationship to the other apes (our phylogeny) and the principle of parsimony allow us to take this first step.

Parsimony: If bonobos and chimpanzees lack psychological systems that humans possess, we know these systems evolved since humans diverged from our last common ancestor. When bonobos, chimpanzees and humans are similar psychologically it is most parsimonious to assume all three species inherited this psychology from their common ancestor (it did not evolve three times independently).

Is to identify the evolutionary process by which cognition evolves between different species – including the process that led to the evolution of the unique features of human psychology. Understanding the selective pressures that can drive the evolution of such psychological systems is the second step in solving Darwin's greatest difficulty.

Comparing the psychology of primates and non-primates to identify cases of psychological convergence (where distantly related species share similar psychological traits) allows us to take this second step.

Convergence: If the psychology of two distantly related species converge, it is possible these shared traits arose independently due to similar selective pressures (i.e., high levels of tolerance in domesticated animals, bonobos and humans may be the result of similar selection pressures). Therefore, cases of convergence may provide a unique opportunity to infer how human-like problem-solving skills evolve.

We conduct our non-invasive behavioral research with chimpanzees and bonobos at:

We also conduct research locally with great apes, lemurs and dogs at:

"The greatest difficulty which presents itself, when we are driven to the above conclusion on the origin of man (evolution through natural selection), is the high standard of intellectual power and moral disposition which he has attained.”
- Charles Darwin, The Descent of Man (1871) 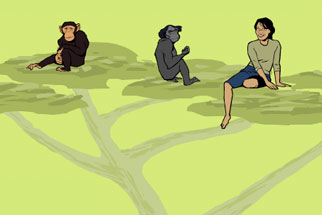 Why do we consider our research non-invasive?