With Amy Goldberg, Mathematics Meets Genetics to Decode Our Evolutionary Past 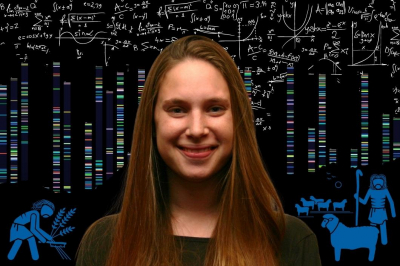 Amy Goldberg has a rare combination of faculty appointments. She is an assistant professor of Evolutionary Anthropology, Biology and Mathematics.

Amy Goldberg’s passion for human evolution probably started with the genetic anthropology books her father poured over during his Ph.D. studies.

“I remember very clearly sitting and looking at one of his big textbooks and sounding out the word au-stra-lo-pith-e-cus when I was maybe nine or 10 years old,” she recalled.

The interest gained from her father’s textbooks sent Goldberg in pursuit of a STEM degree at the University of Michigan. Her main interest wasn’t always in the life sciences, though. The longing to gain as much knowledge in a field as possible made her consider a major in chemistry, but she quickly realized she was “not ‘lab rat’ material.” A mentor encouraged her to pursue mathematics, and on her father’s advice, she decided to enroll in Evolutionary Anthropology 101, taught by Milford Wolpoff.

The subject matter, the storytelling aspect and how engaging the class was made Goldberg reconsider her choice of major, and Wolpoff became her undergraduate mentor. His specialty was paleoanthropology (the study of human fossils), which she found fascinating, but frustrating when it came to the experimentation.

“The sample sizes are often quite small, and I didn't understand how to develop inferences from data this size effectively at that time,” she said. Having by then majored in mathematics, Goldberg combined her quantitative skills with her background in human evolution and dove into evolutionary anthropology from a population genetics standpoint.

At Duke, Goldberg studies population variation, which is the foundation of evolution. Her lab studies the unique ways that humans have interacted with the environment and how different populations, in turn, change and modify the environments in which they live.

Humans as a species have always interacted with each other and adapted to their circumstances based on unique characteristics of their groups — or populations — and their environment. Goldberg works with genetic data from several populations through time and studies how their genes relate to aspects of the time and place in which they lived, their culture and many of their social and environmental factors.

“By studying humans, we can learn about animals, and about biology and evolution broadly because of all the data available,” Goldberg said, “and because of the unique aspects of humans, like the written history we can use to inform our genetics studies.”

Goldberg clarifies that her lab in the Evolutionary Anthropology department is a “carpeted, open-toed shoe lab.” Her team’s research is done through a combination of mathematical modeling and computational data analysis, with not a single lab coat in sight.

One of her lab’s research questions centers around evolutionary models of disease, and how those are affected by the genetics of human populations, and in particular of populations with multiple genetic origins, called admixed populations. One of her team’s scientific papers, for example, looked at the archipelago of Cabo Verde and showed that the blending of gene pools that had once been disconnected greatly expedited the evolution of malaria resistance in these islands.

Goldberg does not do this intense research all by herself, but with a team of graduate students and postdocs. Due to the interdisciplinary nature of her work, students can join her lab from several programs: Evolutionary Anthropology, Mathematics, the Program in Computational Biology and Bioinformatics or the University Program in Genetics and Genomics.

Seven months into her position at Duke, the COVID-19 pandemic began, and Goldberg found herself isolated and working from home. Luckily, North Carolina has plenty to offer in the “outdoors and socially distanced” departments.

“Lots of weekend/day trips over to the ocean to swim or to all the lakes in this area,” Goldberg said. “We’re avid hikers and swimmers, so this is a great place to be.”

“Outdoors” has also included more playgrounds and parks than ever before. “I had a baby a year ago, so that has been keeping us very busy,” she said.

The pandemic encouraged her to get outside, but also be creative inside. “I have also been cooking and reading more,” she said. “It’s a classic pandemic shift that I have been trying to keep up.”

Goldberg is happy to be back on campus this fall, though. Her new colleagues were one of the main reasons why she decided to join Duke.

“I just had so much fun chatting with everyone in the department that this quickly became my absolute favorite top choice,” Goldberg said.

“And that feeling has really never left. The boundaries between departments are really low and everyone works with everyone and chats with everyone; it’s a great place to science,” she said.